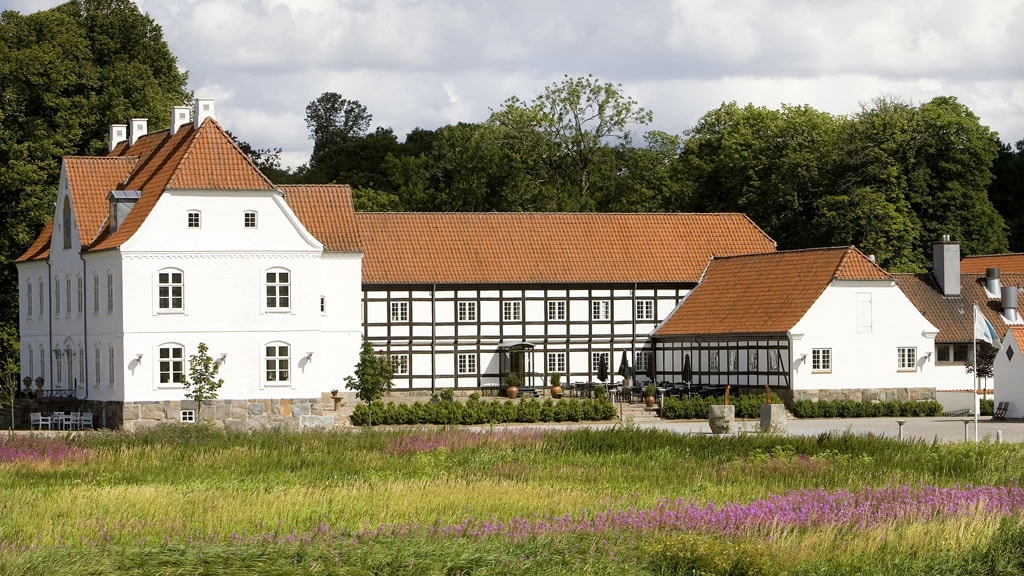 Haraldskær is situated on a castle mounds south of Skibet. Close to Vejle River and in the middle of the beautiful Vejle River Valley, where the hilly terrain was created by melting water from the ice age. Here you find Haraldskær Manor, which today is home to Haraldskær Sinatur Hotel & Conference.

Haraldskær Manor was mentioned for the first time in 1434, when the owner was Niels Friis. Haraldskær remained in the Friis family until 1601. The family built the current main building in 1536. Since then, the main building has burned and been rebuilt several times.

The last member of the Friis family, Albert Friis – national advisor and lord lieutenant at Riberhus – extended the manor and built the current western main wing in 1590. After his death, Haraldskær led a stormy life with a number of distinguished families.

In 1912, yet another wing was added and Haraldskær was gifted with a banqueting hall. In 1916, manufacturer C.M. Hess in Vejle bought Haraldskær and he restored the main wing and rebuilt the ramshackle side wings.

Since 1969, the main building and 41 acres of land have been run as a conference centre by The Danish Union of Teachers. Up through the 1970s, the protected main building was carefully modernized and a wing with rooms was added.

Even today, Haraldskær has several good stories from the past. The large structural pillar that supports the old staircase is believed originally to have been an old ship mast from the time when you could sail all the way to Haraldskær along the river of Vejle Å. Another story goes that a young lady, who grieved herself to death because of unrequited love, haunts the area from Skibet Church, through the old open fireplace room and down to Vejle River.

The ruin of the old manor mill, Kvak Mill and Skibet Church are neighbours to Haraldskær. The church was built between year 1125 and 1150 and belonged to Haraldskær Manor until around 1936. The travertine church is the home of some very beautiful frescos from the eleventh century.