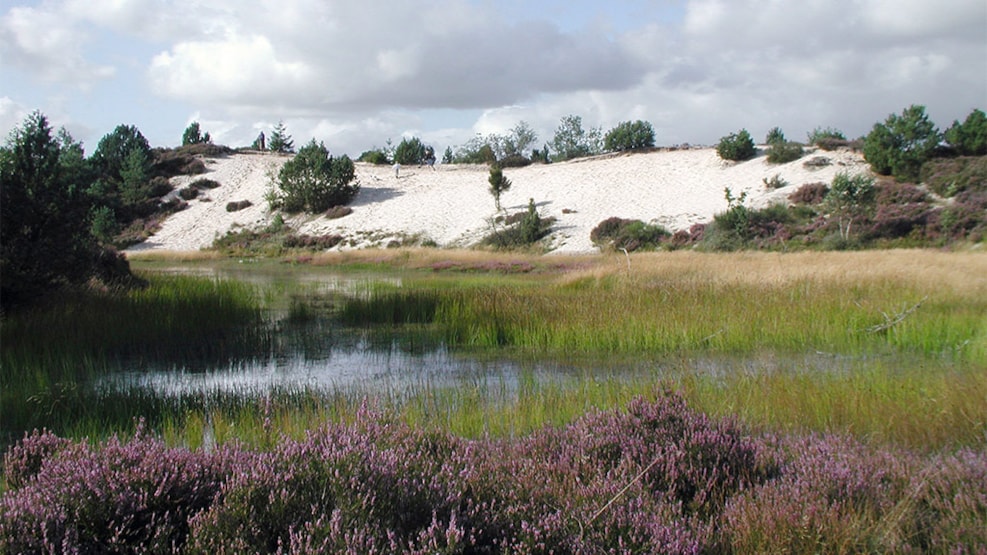 Randbøl Heath and Frederikshåb Plantage are located approx. 10 km southeast of Billund and offer a wealth of nature experiences. Here you can experience Randbøl Hede, which is one of Denmark's largest remaining inland heaths, with a rugged nature that heath farmers, "potato Germans" and finally the state took up the fight against. Frederikshåb Plantage contains a strange natural phenomenon called the Seven Year Lakes, which some years are water-filled and other years completely dried out.

Randbøl Heath
Randbøl Hede southwest of Randbøl is one of the few remaining natural heaths in Denmark. Originally much larger, the 1,875-acre Randbøl Hede is nonetheless one of the nation’s largest inland heaths. Randbøl Hede was declared a nature reserve in 1932 to protect it from being further reclaimed as farmland or woodland.

Randbøl Hede was once a trackless, deserted heathland feared by all, especially commercial travellers due to the roaming bandits. Still meandering across the heath is a track leading to Vorbasse, which for centuries was a droving road along which cattle were led to market in Vorbasse or even further south.

As early as the 1760s, German farmers cultivated potatoes in the area, introducing this novel vegetable to the Danes. In the 1950s, the time-honoured grazing and peat-cutting rights of local farmers were finally abolished.

The Stoltenbjerg Hill, set in the mighty sand dunes of Staldbakkerne, offers spectacular views of the natural heath.

In 1999, a hurricane razed a third of the forest and the many forest openings created by the storm have since been replanted with a mixture of deciduous and coniferous trees.

The plantation has a unique natural phenomenon called the Seven Year Lakes in which some of the lakes in the forest dry out in seven-year cycles only to reappear.

The plantation also has large woodland sand dunes and a peculiar area with around 175 rock mounds, created 5000 years ago.