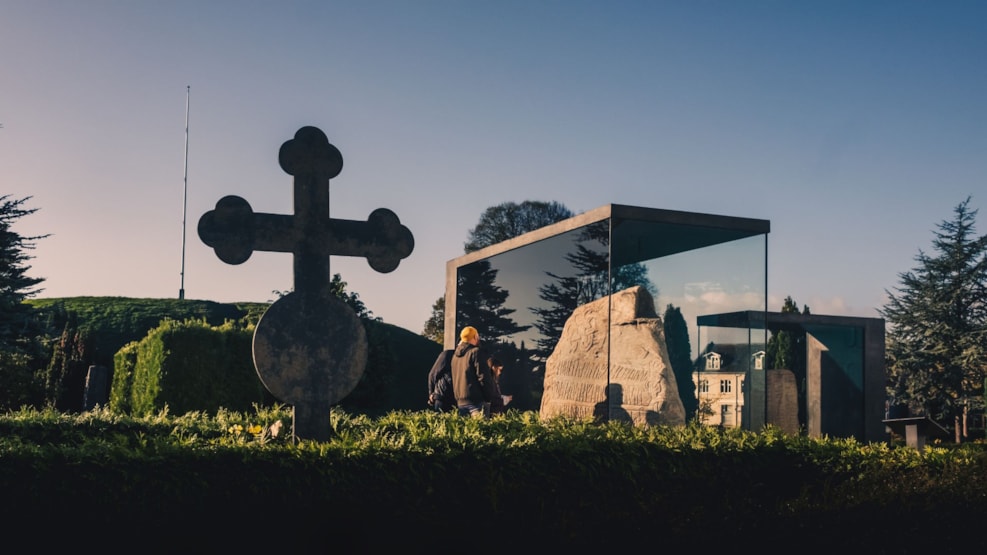 In the tenth century, King Harald Bluetooth had Denmark’s name engraved on a rune stone in Jelling and erected two barrows and a church. The Jelling Monuments have enjoyed UNESCO World Heritage patronage since 1994. In the visitor and experience centre, Kongernes Jelling, you can discover the exciting world of the Vikings and their monuments. After the discovery and study of a mighty, diamond-shaped palisade in the years 2006-13, the entire area around the barrows was changed and surrounded by hundreds of newly erected white concrete pillars that encircle the entire site, marking the approximate location of the original wooden stockade.

The year is 965. Viking King Harald Bluetooth bids farewell to the Norse pantheon and embraces Christianity. He has this message chiselled into a large rune stone in the town of Jelling close to the rune stone erected a few years earlier by his father, King Gorm the Old. On the rune stone Harald boasts of having conquered Denmark and Norway and brought Christianity to the Danes. The inscription reads: “King Harald ordered this monument made in memory of Gorm, his father, and in memory of Thyrvé, his mother; that Harald who won for himself all of Denmark and Norway and made the Danes Christian.” The rune stone is considered Denmark’s baptism certificate and the figure of Christ inscribed on the stone is also featured in all Danish passports.

Gorm the Old’s slightly smaller memorial stone to his Queen, Thyrvé, bears the inscription: “King Gorm made this monument in memory of Thyrvé, his wife, Denmark’s adornment.” This is the oldest reference to the name ‘Denmark’ and the rune stone is therefore referred to as Denmark’s name certificate.

During his reign, King Harald Bluetooth also erected two large barrows and built a church on the site.

Today, Harald’s magnificent Viking monuments are centrally located in the town of Jelling. You can enjoy views of the area from the top of the 10-metre barrows, which have a diameter of 70 meters. The northern barrow contained a wooden tomb, probably constructed by King Harald Bluetooth for his father, who was later re-entombed in the church. Today’s Jelling Church is a Romanesque masonry church, built around 1100 on the site of Harald Bluetooth’s original church from the 900s AD. In 2000, King Gorm the Old was reburied in the church’s burial chamber.

From the top of the barrows you can see hundreds of newly erected white concrete pillars that encircle the entire site, marking the approximate location of the original wooden stockade. Walking along the footpath you can also see an outline representation of the 350-metre ship-shape as well as the positions of the so-called Trelleborg houses. And you can also marvel at the high-tech bronze and glass display cases that today encase the rune stones, which are located between the barrows. You can also enjoy a moment of reflection in the Jelling Church.

Viking Market and the Kongernes Jelling experience centre
Every year in July, a Viking market held by the monuments lets you discover the Viking in you. The amazing Kongernes Jelling experience centre lets you explore the world of the Vikings and the exciting history of the Jelling Monuments in interactive exhibitions. Digital binoculars let you experience what Jelling looked like 1,000 years ago.