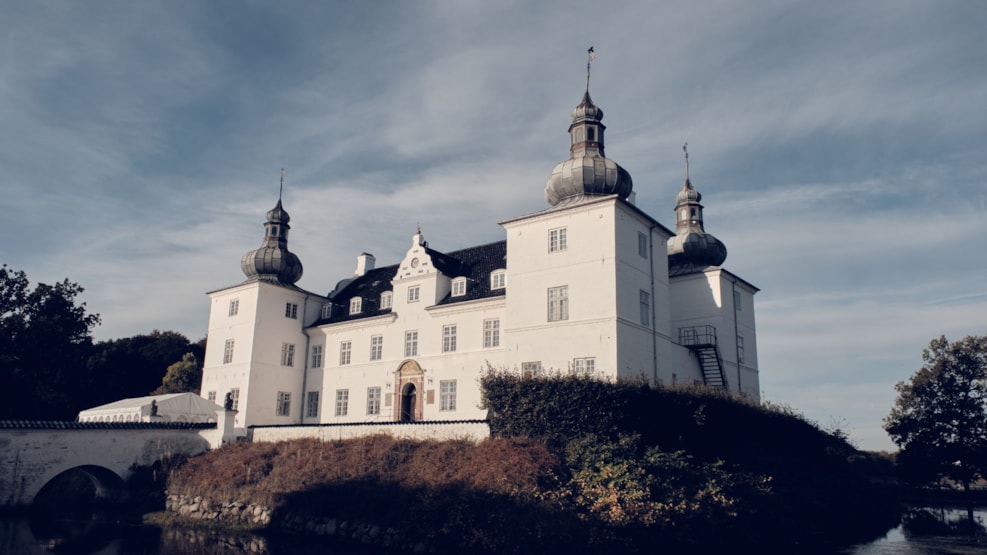 The French-inspired Renaissance Castle Engelsholm is beautifully situated by Nørup on the shores of the Engelsholm Lake surrounded by forest and park. The very complete construction of the castel is rectangular with square towers in each of the corners with onion shaped domes. Engelsholm Castle has since 1940 been run as a folk high school, the Engelsholm Højskole.

The renaissance castle Engelsholm is beautifully situated on the shores of Engelsholm lake, surrounded by forest and park. The castle was built by Knud Brahe – Tycho Brahe’s brother – in 1592. The very complete construction is rectangular with square towers in each of the corners.

The inspiration comes from the castle of Ancy-le-Franc in Bourgogne in France. In the 1730s, Gerhard de Lichtenberg began a comprehensive restoration work and rebuilding of the castle. He added the very characteristic onion domes, built a large three-winged home farm and laid out the park in French style. Chinese paintings describing the reconstruction are still found in the castle.

Gerhard de Lichtenberg also put his stamp on Nørup Church, which belonged to Engelsholm Castle from 1586 to 1935. The Roman church has been richly decorated with baroque furniture and is, just as the castle, decorated with the onion shaped domes.

The castle burned in 1952, but was immediately restored to its original state.

Since 1940, Engelsholm Castle has been run as a folk high school and today, the place is owned by the private institution ”Engelsholm Højskole”. The castle and appurtenant buildings are not open to the public, but every now and then, classical concerts are arranged. However, the castle can bee viewed from the south end of the park.