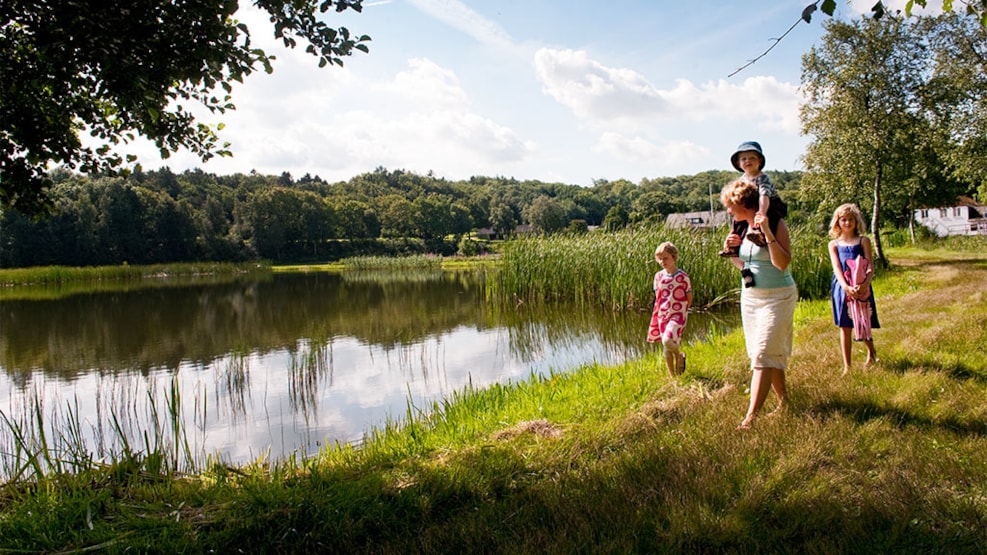 Experience the fantastic nature around Rørbæk Lake, Tinnet Krat and the spring from Gudenåen with beautiful hiking trails, the remains of a spring water bathing facility from the 1930s and a rich wildlife. Rørbæk Lake is situated close to the ridge of Jutland and the Ancient Road (Hærvejen) also croses valley. Rørbæk Lake offers scenic areas with forests, meadows, plantations and heathland, as well as Tinnet Krat and Kollemorten Krat, which make up some of the country's largest areas of oak scrub; Denmark's original forests.

Rørbæk Lake is situated close to the ridge of Jutland, where the springs from the two largest rivers, Skern Å and Gudenåen – take their rise in the same valley only a few hundred meters apart from each other. The valley is also home to the Ancient Road (Hærvejen) that for centuries was the main Jutland thoroughfare.

Rørbæk Lake is a characteristic long lake arisen in the ice ages. The lake is surrounded by forest all around and steep hills with heather and juniper berry embellish the area.  A range of hills, Fårebanke and Kælderbanke rises in the west end of the lake. The lake has, among other fish, pike, bream and the rare lake trout and during the fall and winter months, the lake becomes the home of a lot of surface-feeding ducks and diving ducks. The area has a lot of deer and red deer and the water attracts many different species of birds such as water ouzel, kingfisher and fish hawk.

The 160-kilometer Gudenåen, one of Denmark’s longest rivers, flows to the eastern town of Randers. Peat, bricks and marl were some of the items shipped down the river in bygone times.

Jutting out of the grassy meadows by the river source of Gudenåen are old concrete foundations. These are the remains of a spring water bathing facility from the 1930s. The bathing facility, complete with swimming pools, a spring water fountain and a café pavilion, was a major attraction at the time, but had to close after a swimming accident shortly after World War II.

In a forest further south of the Ancient Road, after the church of Øster Nykirke, you find the remains of an ancient rampart, the Margrethe Dike, from the time when Denmark was still a patchwork of smaller kingdoms.

The very scenic area, which surrounds the Rørbæk Lake, offers forests, meadows, plantations and heaths as well as Tinnet Krat and Kollemorten Krat, which are some of the country’s largest areas of oak scrub. A harsh climate of strong winds has over centuries given the trees their mysteriously gnarled appearance.

At the Ballesbækgård Visitor's Centre south of the lake you will find toilets, handicap toilet, bonfire and barbeque facilities as well as tables and benches are available. Angling is permitted and free of charge from the shores of Ballebæksgård Bay.

A net of marked trails, including a handicap trail, take you around the area.

The Gudenåen legend
According to legend, Gudenåen was named after an unruly lad called Gudar. He abducted a girl named Else from her father’s home in Tinnet Krat where the Gudenåen River has its rise.

Gudar then tied the girl to a cart and tried to shake off his pursuers by riding in wild directions. The girl’s father sought help from a wise man in Tørring, who summoned the streams and springs to ask for guidance. High waters engulfed Gudar at Randers Inlet and he and his horse drowned, but the beautiful Else survived.