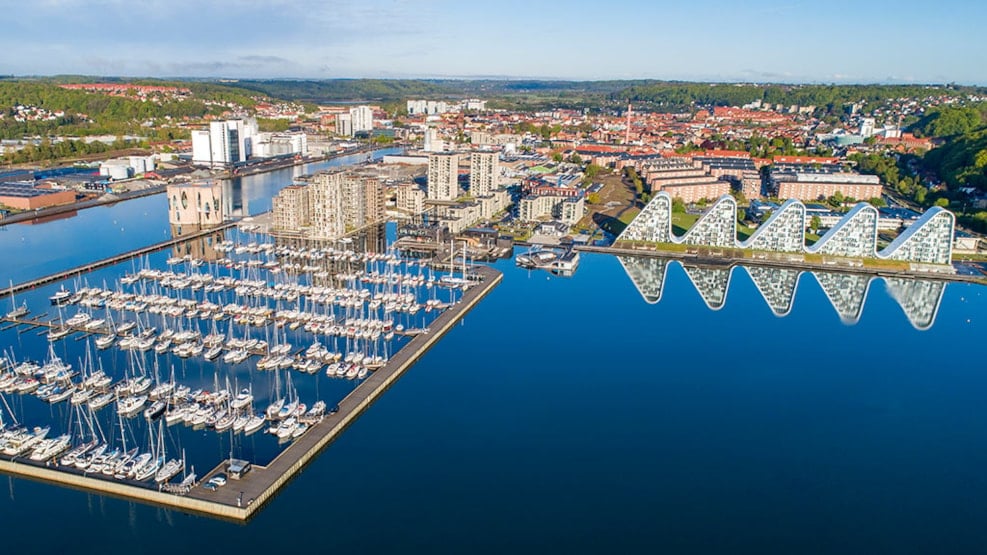 Vejle’s waterfront has over the past few years been transformed into a modern and charming canal district with a vibrant maritime club life. Today the area features award-winning architecture and sustainable housing.

On the landside you find residential areas with rental as well as owner-occupied apartments in addition to the rowing clubhouse of Vejle Roklub and the futuristic housing estate Bølgen (The Wave). There is access to Klubøen (Club Island) with a marina and Den Flydende Kajakklub (Floating Kayak Club) – both constructed on pontoons in the harbour. On the islet of Havneøen, exclusive apartments are currently being built. A bridge leads to the iconic corporate headquarters, Fjordenhus, designed by artist Olafur Eliasson.

Club Island and marina
Klubøen (The Club Island) is home to Vejle’s maritime clubs. The large building houses facilities for the sailing club, motorboat club, dinghy club and visiting vessels as well as offices and public toilets. Located on the upper floor is the popular Restaurant Remouladen that features a terrace with panoramic views of the inlet and waterfront. On the upper level there is a roof terrace with exercise equipment. At the pier, which connects Klubøen with the marina, there is a nice cream parlour during summer months in addition to a large pontoon with tables and benches and two small pontoons designed for water games. Klubøen is designed by Transform.

The floating kayak club
Vejle Kayak Club probably has Denmark’s most unique clubhouse. The manmade island is located about 20 metres from shore and can be reached via a footbridge. The island, which is almost V-shaped, is designed by Force4 Architects. Besides club and storage facilities and a launch area for kayaking club members, the floating kayak club also has space for nature guides to teach. Along the island’s embankments there are wooden stairs and roof terraces that offer tables and benches and guaranteed panoramic views. There is public access between 8:00 and 22:00, under due consideration for the kayakers.

Bølgen
The exclusive wave-shaped apartment complex called Bølgen (The Wave) has received a host of awards and has become one of Vejle’s architectural landmarks. The building consists of five consecutive waves, each reaching a height of nine storeys. Bølgen was designed by Henning Larsen Architects.

The first two ‘Waves’ were completed in 2009, after which construction stopped during the financial crisis. The last three ‘Waves’ were commenced in 2015 and by the end of 2018, all five ‘Waves’ had been completed.

Havneøen and Fjordenhus
Currently being constructed in an area covering 24,400 m2 in the dockland are nine luxury residential towers surrounded by canals and an open harbour square. There is access to Fjordenhus, the corporate headquarters of investment company Kirk Kapital, via a bridge from the islet of Havneøen (Harbour Island). Designed by world-renowned artist Olafur Eliasson, the iconic building is open to the public on the ground floor. Here, you can see site-specific artworks by the artist. The house was opened on 9 June 2018.