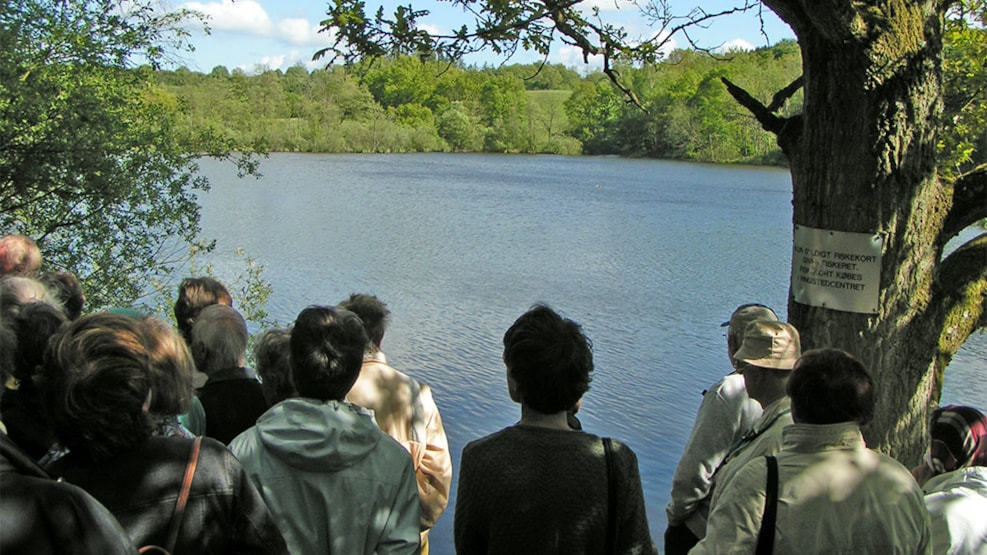 Vingsted Lake is located on the outskirts of Vejle Ådal and was previously used as a weapon sacrifice bog. It is possible to fish in the lake where pike, perch and shells live. Nearby you will also find the Iron Age village of Vingsted and Vingsted Historical Workshop as well as the Vingsted Hotel & Conference Center and an area with shelters, campfire site, tables and benches, splash area and underwater box.

Vingsted Lake is situated between Bredsten and Ødsted on the outskirts of Vejle River Valley. The 15 acre large lake is one of the country’s 25 lakes and bogs from the iron-age, which are called “weapons sacrifice bogs”. The sacrificing of large quantities of valuable weapons and equipment in bogs and lakes is interpreted as spoils of war sacrificing after beaten invasion troops from southern Norway and the area around Göteborg.

Everything indicates that the findings in Vinding Lake, which is one of Denmark’s smallest weapons sacrificing bogs, are from one large sacrificing around year 250 A.D. The objects are on display at Vejle’s heritage museum Kulturmuseet in Spinderihallerne.

At the lake, you will see reed mace, willow bush and Denmark’s most poisonous plant, the water hemlock. The lake is the home of pike, perch and roach and a great breeding place for toads. There is also the opportunity to fish in the lake. Day licenses can be purchased from Vejle Sportsfiskerforening (Vejle Sports Angling Association) and VisitVejle.

At the east end of the lake, you will see 2 copies of god pillars found in bogs in the iron age. They depict the habitual gods Njord and Nerthus. The characters are a part of the iron age activities at Jernalderlandsbyen i Vingsted (The Iron Age Village in Vingsted). The iron age village is a place for teaching and cultural activities for schools and other groups. Among other things, the area comprises reconstructed iron age farms complete with workshops. The area is open for visits under consideration of any activities that may be happening.

In the vicinity you also find Vingsted Hotel & Conference Centre and a riverside recreational area with shelters, a campfire site, picnic tables and benches, a splash area and an underwater viewing box.

Marked trails lead you around the area.